It was a grand plan to haul ships over ground as a short cut-but it didn't quite get off the ground.

Visitors who stop at the small tourist bureau in the NB-NS border community of Tidnish Bridge, NS, usually ask about the 19th century stone bridge a few hundred metres away, strangely out of place in this tiny, bucolic village. The answer may be surprising: the finely crafted Keystone Bridge was once a railway span, hewn from the same local sandstone that was used to build the Nova Scotia legislature in Halifax and the Parliament Buildings in Ottawa. But perhaps the most interesting aspect of the bridge is the tale of the Chignecto Ship Railway.

The story begins at Tidnish Dock Provincial Park, a few kilometres from New Brunswick on the shore of the Northumberland Strait. With its grassy picnic area, woodland hiking trails, a beach with warm water for swimming, intriguing geology, flora and fauna, and impressive views of Prince Edward Island, it's a typical park. But dig a little deeper and Tidnish Dock Park is anything but typical.

The deep, trenched path that leads to the beach and the cut stones piled around it are actually the remains of a century-old ship dry dock; the approximately five-kilometre-long hiking trail that winds from the park through a deciduous forest to the Tidnish Bridge visitors' centre is all that's left of a century-old railway bed. They are the old bones of one man's dream: to haul oceangoing ships 27 kilometres over the Isthmus of Chignecto, from the Northumberland Strait to the Bay of Fundy.

Henry Ketchum was an internationally known civil engineer and designer of railways, born in Fredericton, NB, in 1839. His grand scheme hinged on the geographic fact that Nova Scotia is connected to New Brunswick by the Isthmus of Chignecto, a low strip of marshy land. A voyage around Nova Scotia-otherwise an island-meant a sea journey of more than 1,000 kilometres, which often took ships a week to complete and exposed them to the dangers of sudden storms and hidden shoals. Finding a way across the isthmus could save the shipping industry millions of dollars.

To dig a canal through Chignecto seemed to make sense, but Ketchum was a railway man and knew little of canals. Besides, canals were an old-fashioned idea in the waning decades of the 19th century-these were heady times for railway travel.

All over the world railways were shrinking distances and changing people's perspectives of travel. Trains were new, they were fast, and they were putting canals out of business. Some of Ketchum's engineering colleagues had even tabled proposals to build ship railways where the Suez and Panama Canals would eventually be built. By those standards, Ketchum's plan was modest.

Closer to home, the Canadian Pacific was driving spikes across the land, uniting a new nation in the process.

By 1882, Ketchum had found backers for his railway. One of them, Charles Tupper, the minister of Canals and Railways and the local MP, convinced the federal government to provide subsidies for Ketchum's Chignecto Marine Transportation Company.

Construction began in 1888. For the next three years the small communities on the Isthmus of Chignecto buzzed with activity as 4,000 labourers worked on the project, up to 1,200 Italian navvies and Scottish stonemasons. They toiled mostly with picks, shovels and hammers to lay the foundations, build the rail beds and bridges and dig out the dry docks that would become the Chignecto Ship Railway. They erected a huge coffer dam at Tidnish to dry up the sea bottom in order to build the dry dock and breakwaters.

Workers cut and hauled the stone for the Keystone Bridge, and dug masses of mud from the LaPlanche River. At night they returned to rough camps erected on the outskirts of Amherst and Tidnish, eating bad food and struggling with the cold and rain.

For a time it looked like Ketchum's scheme would succeed. Scientific American magazine trumpeted the project as a modern engineering marvel, and engineers around the world pointed to the ship railway as a case study.

But in 1891, construction ground to a halt: the Chignecto Marine Transportation Company ran out of money. Ketchum refused to give up on his dream, and tried to drum up support for the project until he died suddenly in Amherst in 1896. He was buried in a small cemetery in Tidnish, next to his railway, but his body was later transported to Sackville, NB, to be closer to his widow's home.

Ketchum's dream was thwarted by a number of things-by the marshy lands around Tantramar that swallowed rail beds and machinery whole; by the late 19th century railway scandals that destroyed the political will of his backers in the Conservative government; and by a misguided faith in the power of railway technology to solve any engineering challenge.

Today Ketchum's abandoned rail line preserves another legacy-it enables hikers to experience the beauty of the Tantramar Marsh. The old rail bed forms one of the best hiking trails in Cumberland County, winding through the forest and marshes, passing waterfowl nesting grounds and river valleys.

The trail crosses two bridges. Keystone Bridge, with its massive stone block arch, looks like it could still support the weight of a train and an ocean-going ship, more than 100 years later. The other bridge is newer and flimsier-a 66-metre-long suspension bridge built to carry hikers across the Tidnish River. The Henry G.C. Ketchum Memorial Suspension Bridge is the last memorial to the imaginative man from New Brunswick and his misguided dream.

Getting to know Kayla Mansfield-Brown 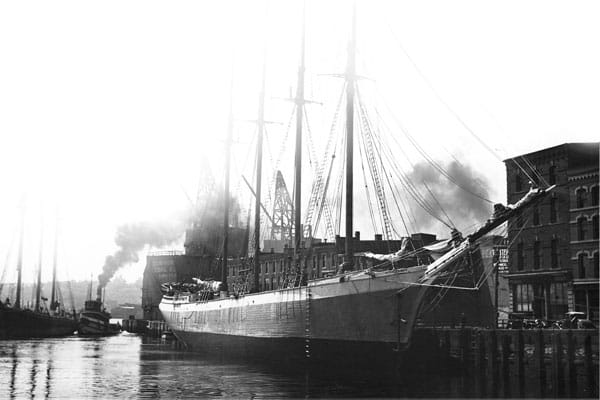 She was the last Queen of her kind to sail out of the Miramichi River, quite possibly the last anywhere in the Atlantic Provinces. When she made her last voyage in March of 1937, the Avon Queen was...

Shippagan’s new mayor Kassim Doumbia won’t rest until his adopted town is as youthful, energetic and straight-up cool as he is