Story and photography by Darcy Rhyno

Resting in our kayaks next to a granite boulder the size of a bus, guide Colin Smith is spinning a creation yarn of mythic proportions. He’s telling our small group of paddlers huddled out of the wind off the open Atlantic how all the hundreds of boulders like the one beside us came to be scattered about the landscape here around Lower Prospect just south of Halifax.

“Giants would walk along these nice, pebbly beaches,” Smith explains. Highly trained guides like him lead this Sea-to-Table Lobster Adventure tour for East Coast Outfitters (ECO). “And of course, they’d get pebbles in their shoes. So, they’d take off their shoes and empty the pebbles out. Wherever those pebbles ended up is where we have these nice rocks.”

With his woolly beard, primitive-looking piercings (an orbital ring through the middle of each ear and a brown stretch earring in each lobe) and a wooden Greenland style paddle that he carved himself resting on his lap, Smith has the appearance of a Viking fresh off a trans-Atlantic journey. Under his spell, I’m now a believer in giants.

The factual story, no less interesting, goes like this, as Smith tells it. Some 20,000 years ago, Nova Scotia was buried deep beneath a kilometre of glacial ice. The creeping behemoth scraped up bits of the ancient granite and carried them along. As the climate warmed again, the glacier dropped these boulder bits on its receding pathway.

Smith says the clarity of the water beneath our kayaks, where rockweed in shades of copper and chestnut undulate in the current, is because there is so little sediment in this bay scraped by glaciers. “There’s all sorts of stuff to look at,” Smith says. He tells us about the different kinds of seaweed and their uses, everything from spa treatments to insulation. “If you keep an eye out, you can spot a lobster.”

Right. With all these stories arising from this captivating landscape, I’d forgotten our purpose—to paddle to a lobster feast. We head out again, rounding boulders balanced on the backs of wave-swept bedrock like pebbles shaken from a giant shoe. We scoot across open water where the wind does its best to hold us back from our goal, a tiny narrow bridge at Herring Hole. As I approach, I stop paddling, duck my head and drift into a protected harbour lined by wharves, boats, fishing shacks and a few houses.

We follow Smith to the shore where Who Cares is docked at a wharf barely long enough to accommodate this small Cape Sable Island style lobster boat.

Captain Lyle Morash and his deckhand and father Louie greet us with big waves and generous welcomes as we pull our kayaks up next to a rainbow of buoys and coiled ropes. We join them beside a heavily worn bait table where we are tutored in the art of lobster banding. The tool used to slip a rubber band over the lobster’s two big claws works like a pair of scissors in reverse, stretching the band when Lyle squeezes the handles.

Once its claws are banded so the lobster can’t pinch my fingers or other lobsters in its crate, Lyle measures the carapace or back of the lobster to ensure it’s over minimum legal size. As Lyle explains, “When a lobster is stressed, the first thing they do is drop a claw. But it grows back,” he reassures us. “Not your finger. The claw.”

It’s a good thing we’re a small group because when we all board Who Cares and Louie tosses Lyle a couple of wooden traps for demonstration purposes, we’re near capacity. Louie throws the lines, jumps aboard and Lyle hits the throttle. Steaming among the islands and inlets, Captain Lyle is as aware of the landscape as Colin Smith is, but for different reasons.

“This place is full of rocks” Lyle says, studying the sonar screen in front of him for boulders below that might pose a threat to the boat. I ask our captain to name the dangers he fears most out here among the glacial erratics.

“The biggest fear is you lose power,” he says. We think about that for a moment, imagining the boat at the mercy of giant forces like waves and wind and bus-size boulders. “Every time you go out, you weigh your options. A lot can happen real fast.”

Things lighten up when captain and crew set their two traps, then swing around and haul them again. We get to see how fishermen spend their day, working the equipment and the sea. Louie invites us to try our hand at gaffing a buoy as the boat drifts by. With the buoy aboard, Louie wraps the attached rope into the hauler, pulling the trap from the bottom back into the boat. The sun is setting. We head back to the ECO dock where we started our kayak tour, all dangers forgotten.

We wave a farewell to our new fishermen friends, then turn to greet chef Dennis Johnston who is preparing our lobster feast against a backdrop of kayaks as colourful as all those buoys and ropes at the Who Cares wharf. When I investigate what’s for supper, I spot fish, mussels, seaweeds and oysters. This is going to be a seafood feast to remember.

As he works, Johnston tells us about his history as a top chef. The former founder and chef at Fid Resto in Halifax, he and many of his colleagues were instrumental in Nova Scotia’s introduction to the slow food movement. Special events like ECO’s Sea-to-Table Lobster Adventure keep him busy these days. To whet our appetites, he lifts the cover on a big pot. Steam billows out to reveal bright red lobsters. Johnston explains that he’s cooking the lobsters by steeping rather than boiling them.

“If you’ve ever had tough lobster, it’s because it’s been violently boiled for a long time,” Johnston says. “You’ll notice how tender these are. You steep them like tea.”

While the lobsters complete their steep, I settle in with our group around a beautifully- set table. Wine is poured. Johnston serves a couple of unusual starters made with fresh, local ingredients. The first is a dish of radishes on whipped butter sprinkled with sea salt. The second features delicate morel mushrooms foraged nearby and mixed with plump, shelled peas.

More Nova Scotia delicacies follow. I’m delighted to sample each in turn. Pristine bay oysters come with a choice of homemade mignonette sauce or limes and hot sauce. I try both, but can’t decide which is better. Thin slices of halibut ceviche is flavoured with Johnston’s balsam fir oil, made with the tips of balsam fir tree branches gathered in spring when their flavour is still delicate. Pickled spruce tips are scattered about the plate. Johnston places a steaming bowl of mussels on the table. I spoon a few on my plate, pluck one of the orange meats from the shell and pop it in my mouth. It’s sweet and smoky. Johnston says he’s opened the mussels in a mix of salt water, butter and smoked dulse, a local purple seaweed.

Then the lobsters are loaded on to the table. Those familiar with the local crustacean tear into it by snapping off claws and flipping the meat from the shell. Others new to lobster and untrained in technique get pointers from Johnston and the more experienced around the table.

At last, we can eat no more. We give the chef a round of applause for his locavore feast that’s foraged, farmed and fished from these forests, fields and waters. The sun has dipped below the horizon, lighting the clouds with the warmest of colours as if from a fire within. All those erratic boulders in the near and far distance stand in silhouette against the sunset as if some giant passing figure had dropped them like pebbles from a pocket in this welcoming, ruggedly beautiful, sometimes dangerous land of myth and delicious delicacies. 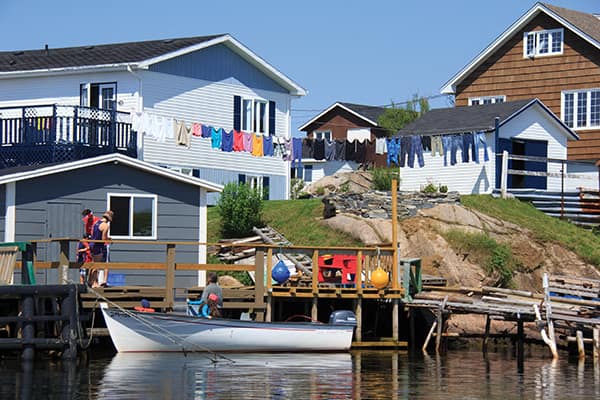 An island for every day of the year

I spot a huge creature in the water just a couple feet away from the ferry. It looks almost mythical. It takes me a few seconds to realize I’m seeing a swordfish. Moments later, a basking shark... 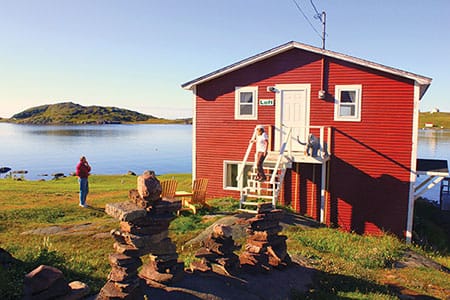 A Whale of a History