Eagles have the advantage of size but they’re also smart, using opportunity and experience to survive northern winters

The shorebird was hiding in the short grass covering the small island in the harbour, waiting for the ebbing tide to expose mudflats nearby. Suddenly a female northern harrier swooped out of the sky, and pounced upon the hapless bird. A short struggle ensued. The harrier had barely begun plucking feathers from its prize when a young bald eagle (Haliaeetus leucocephalus), having watched the catch from a tree a half-mile away, began flying low across the water. In no time the startled harrier leapt into the air, and the eagle took possession of the catch.

Farther up the harbour, another witness, an adult bald eagle, deftly jumped from its perch in a white pine, filling the air with ponderous wingbeats. Sensing that it had no chance as the older eagle bore down on it, the young eagle flew away.

Bald eagle eyesight is roughly eight times more acute than that of humans. Adept at locating fish underwater, they watch patiently from a perch high in a tree. Seeing a meal, an eagle will swoop down to grab it with scalpel-sharp talons. They also hunt birds and mammals, and sometimes turtles, crabs and shellfish. Quick to steal from ospreys and other hawks (including harriers), and occasionally from an angler reeling in a catch, eagles will also enthusiastically scavenge dead carcasses, using their strongly hooked bills to rip off pieces they can swallow.

Bald eagles are very large birds, with wingspans that measure as much as 2.4 metres. Only vultures, great blue herons, sandhill cranes and golden eagles compete in size. Female eagles are larger than males, the heaviest being about 6.8 kilograms.

Young of the year sport dark, chocolate brown feathers. They remain brown with some white flecking until they reach maturity at about five years of age, when the characteristic white head and tail develops. With hollow bones, individuals gradually shrink as their lives extend to two decades or more.

As summer’s abundance of food begins to wane and temperatures dip, bald eagles in Atlantic Canada face the scarcities of winter. They migrate to warmer parts within the region, or to Maine and New England, where more open water remains.

Because of their size, eagles have substantial food requirements; they have long lives, and a lot to learn over many years. Young eagles are low on the social pecking order and vulnerable to starvation. Studies suggest that about half of them die in their first winter.

Eagles that stay and survive our northern winter use a combination of acquired knowledge and opportunism. They learn where and when prey gathers. For example, although the Canso Causeway was built about 60 years ago, it still blocks a traditional fall migration of billfish (also called Atlantic saury). Schools of billfish pile up for weeks on the south side of the causeway. The eagles anticipate that arrival, and another bonus nearby: the high-altitude electrical wires connecting mainland Nova Scotia with Cape Breton injure or kill hundreds of shorebirds, waterfowl and other bird species when they migrate along this traditional route at night. Eagles scavenge their remains near the causeway each spring and fall.

Tomcod spawn in winter around ice cracks on large tidal rivers like the Shubenacadie, in Nova Scotia, unaware that eagles wait for them. Waterfowl often overwinter on traditionally open, fast-moving waters in harbours. Eagles scrutinize such flocks regularly for any individuals that become injured or infirm.

Eagles can respond quickly when something happens by chance. An unusual flood cracked the surface ice covering Ogdens Pond, NS, many years ago. Thousands of wintering Atlantic silversides, a small coastal fish, moved from the depths of the pond into the water over the ice. Within days a hundred bald eagles had arrived to dine upon them—they congregate where food is plentiful.

These rapid winter gatherings appear to happen when bald eagles fly and soar in loose groups spaced apart, ranging over wide areas. They listen for the calls of other scavengers, like ravens and crows, and scan the land below. If one of the group descends to the ground and stays, the other eagles fly in to check it out.

When the local fish hatchery began having serious bald eagle predation problems in late winter, I offered to provide road-killed deer for their walk-in freezer. Knowing where the pair nested, the hatchery staff could deliver a deer as needed to ease the toll on trout.

Just after church on a chilly March morning a couple of years ago, my wife and I were driving home when I spotted a lone eagle on the ice of North Sydney Harbour, near Ball’s Creek, NS. It was the first time I had ever seen an eagle up close. Since I always carry my camera with me, I jumped out of the car and was able to capture the eagle just as it flew away.

We happened to be right in front of Wayne Gouthro’s home, although we didn’t yet know Wayne. He had been watching from his window, and came down to chat. He invited us to return that afternoon, and Wayne and his wife, Claudia, soon became our good friends.

Now, thanks to Wayne, I have close to 4,000 eagle photos in my collection.

Wayne’s eagle story starts like this: back in 1996, he spotted two eagles perched on a tree in his driveway. They flew away as he approached them. The following day, he took some meat from his fridge and threw it to them.

“They were sitting in the tree all the time and I knew they were hungry,” he says. “I just wanted to see if they would take it.” It was left untouched for a day; eventually the eagles devoured it. It would be the beginning of a long-term relationship.

Wayne, who knew that it was sometimes difficult for the eagles to fend for themselves during the winter months when the creek—a major food source—was frozen over, soon found a butcher in Sydney Mines, NS, who was willing to provide scraps, and he began feeding the eagles every Sunday afternoon.

Initially, he would place meat on a stick and jam the end of the stick into a snowbank—but the crows got the meat. In order to give the eagles a better advantage, he began throwing food out onto the ice of Ball’s Creek as far as he could.

For the first few months, two eagles turned up on a regular basis, and soon two more joined the feedings.

Two years later, two new eagles appeared at the end of Wayne’s driveway; one appeared to have a broken leg. When Wayne fed them, the injured eagle would support itself by leaning on a wing so that it could eat. The wise crows soon caught on, however. They stood behind the eagle, tugging on its tail, causing it to lose balance. At the same time, one of the other crows would steal the food. Shortly after that, the injured eagle disappeared and never returned. Nevertheless, Wayne had six eagles who would return on a regular basis before that winter ended.

Every year, the eagles returned, and Wayne continued to feed them each Sunday. It wasn’t long before word spread in the community, and other people began to notice the gulls, crows and eagles gathered on the ice. Some would stop along the highway and watch; others would find their way around to Oak Farm Road to view the sight from closer up.

They came with their cameras and watched those beautiful predators with awe. There might be as many as 70 people (and 30 cars) along that very short, dead-end road.

Photographers would line up along the banks at the side of the road in an effort to capture these beautiful birds as they moved swiftly through the sky and across the ice.

Last winter, Wayne began feeding the birds more frequently because of bad weather and a greater availability of food—thanks to several butcher shops in Sydney and North Sydney who see to it that Wayne’s eagles have their meals.

“The eagles sit here on the telephone pole in the morning, screeching, so I know what they want. They follow my truck when I’m coming back up the road. They know the food is in the back.”

Now, Wayne continues to keep an eye on the eagles, both winter and summer. He has as many as 17 eagles at a feeding, and has learned to almost communicate with them.

“When they start screeching, sometimes I’ll squeal back to them and they’ll turn right around and look. They think it’s another eagle,” he says.

When I ask Wayne why he goes to all the trouble, his answer is simple: “I just like feeding them. I like watching them. They’re quite a bird.”

Feeding eagles has become a winter past-time in parts of the Maritimes. (See “The Eagle Feeder,” page 33.) The Sheffield Mills Eagle Watch, in the Annapolis Valley, NS, is an annual January/February community event that’s been running for 20 years, offering eagle-related exhibits, photography demonstrations, music, breakfasts and lunches—and a map with best-bet viewing sites based on where chicken is put out for the raptors.

Whereas most birds breed in May and June, the bald eagle breeding season begins in late winter. Ravens and a few other year-round residents also nest early: they are spared the rigours of migration, and also get a jump on the best nesting sites. Pairs are often incubating eggs while ice is still covering lakes and harbours, and food is scarce.

An early season means that eaglets have more time to grow and learn before the first winter sets in. Eagles nest in large trees with strong branching structures, such as pines and poplars, to support heavy homes—new material is added each year, and nests may eventually weigh a ton or more. They like to nest in their hunting territory, usually near water.

Bald eagle populations appear to be on the rise in eastern Canada. Newfoundland and Nova Scotia populations have been abundant for decades. New Brunswick and Prince Edward Island populations are gradually expanding. The lower Saint John River in particular has become a spot for observing them.

Like the proverbial canary in the coal mine, healthy populations of bald eagles are a general indication of healthy environments—and they make fascinating neighbours! 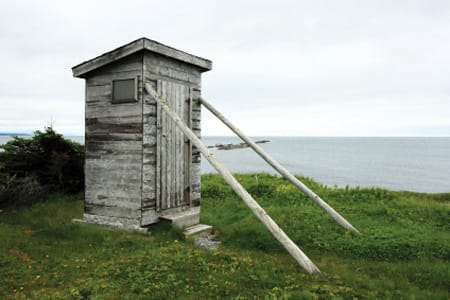 Ode to the Outhouse

I am old enough to have kids old enough to wax nostalgic on what life was like when they were young. My children think things have changed a lot, and in time they will surely tell their children...

Connecting customers with the people who grow their food 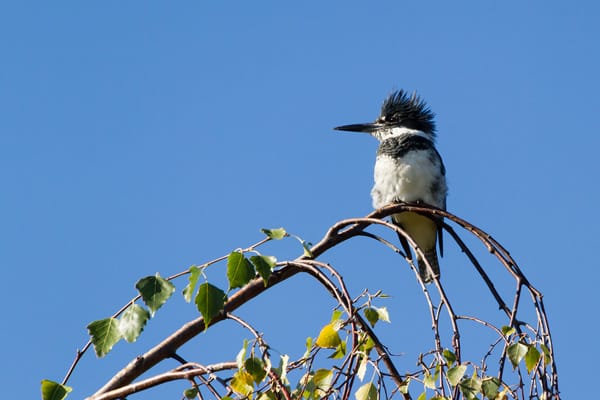 The Heavy Headers Come to Town

I often hear kingfishers while I’m paddling along a tree-shadowed shore during summer. Inevitably, they see me first. Their wild, rattling protest of my intrusion into their waterway is similar to a...