From peddlers to premiers, Atlantic Canadians of Lebanese descent have had significant impacts across the region… not least of all with their love of a good party.

Atlantic Canadians of Lebanese descent have had significant impacts on life, politics and economics in the region. The list includes:

In 1911, 15-year-old Ibrahim Kassouf left his home in the Mount Lebanon area of Syria. By the time he arrived at the train station in Newcastle, NB, he had become, according to the tag on his chest, Abraham Asoyuf. His brother, Charles, who had immigrated to New Brunswick in 1897, came to collect him.

The very next day, with no English and a few words of French, Abe Asoyuf set out to peddle a pack of dry goods and notions from Charles’ store in Eel River, near Baie Ste. Anne on Miramichi Bay.

Charles was already on his way to becoming a successful merchant, and Abe followed his lead. Before long, Abe owned a fish packing plant. When it came time for him to have a wife, his parents arranged his marriage to a cousin, Zakia, from home. He met her boat in Montreal and brought her home.

The Lebanese immigrant story would be repeated over and over throughout Atlantic Canada—most notably in Nova Scotia and New Brunswick—throughout the decades that followed. Today, people of Lebanese origin are the third largest immigrant group in Halifax, after those from the UK and the US. Regionally, there are more than 10,000 Atlantic Canadians who report that they are of Lebanese descent. Nova Scotia is home to about 6,500 of those, while New Brunswick is home to almost 3,000, Newfoundland about 800 and PEI, 600.

The first surge of emigration from what was then Syria and part of the Turkish Ottoman Empire occurred between 1880 and 1914. “People had to leave to look for more opportunities, so they would just get onto a boat and wherever the boat arrived, that’s where they’d get out,” says Wadih Fares, honorary Consulate of Lebanon, in Halifax, and a prominent developer in the region. “It just happened that some of them landed in Halifax.” He laughs. “We joke about this and say, ‘Couldn’t they have landed in Florida?’ But, joking aside, we are very happy here.”

The earliest immigrants were largely Christian; many were farmers, small commodity producers or craftsmen. Many did not have the capital to establish farms or the education to establish professional occupations.

“Our grandfathers, they were peddlers,” says Fares. “They went out on their feet and they had the products on their backs. And they walked to the rural areas and they sold their products for three or four days at a time.” It was arduous work, carrying carefully balanced packs that weighed about 100 pounds, but it proved fruitful. In the days before catalogues and cars, country homemakers eagerly anticipated the arrival of the peddlers with staples like suspenders, shoelaces, thread, pins, needles, tapes, scissors, thimbles and elastic, along with fabrics and items of clothing.

Those peddlers also brought news, and paid for meals and accommodation with small gifts from their packs. Many eventually opened stores near their routes, which accounts for the fairly widespread presence of Lebanese Canadian families in communities throughout Atlantic Canada.

Many immigrants moved to cities, where friends and relatives helped them get established. That family connection, says Fares, goes a long way toward explaining the sizeable Lebanese community that now exists in Atlantic Canada. He himself came in 1976, during the Lebanese civil war—a period when many young people left Lebanon.

“People bring people,” he says. “I didn’t come to Halifax because of what I knew about Halifax. I came here because my uncles were here and my grandmother was here and a lot of people from my own village were here.” Still, he says, it wasn’t easy. “Immigration is all emotion,” he says. “We can’t live without family; our culture is family togetherness, so if one of us leaves, it is very hard on the rest, and very hard on the person who leaves. But when we come here, there’s a community and a social infrastructure. So you have your church or you have your mosque or you have your social club.

“At the end of the day, jobs are not everything.”

Immigrants often face conflicting desires to both assimilate and to retain the cultural traditions of the homeland. However, the earliest Lebanese settlers in this region began to assimilate into the local cultures almost immediately.

But just as local customs influenced immigrant customs, Lebanese culture has had an impact on Atlantic Canadian culture—particularly when it comes to food. Over time, Lebanese, Turkish, Syrian, Greek and other Mid East or Mediterranean foods have intermixed and evolved, so it’s difficult to determine the origin of some dishes. Foods associated with Lebanon, although not always exclusively, like yogurt, hummus, baba ghanouj, tabbouleh, dolmas, kibbeh, fattoush, falafel and shawarma, are familiar to many Atlantic Canadians. Most large communities throughout the region have Lebanese restaurants—their roots go back to the influx of Lebanese immigrants during the civil war in the ’70s and ’80s—and otherwise generic Mom-and-Pop restaurants typically feature many Mid Eastern foods on their menus.

An interesting aspect of Lebanese culture that has crossed into non-Lebanese cultures—particularly around Sydney, NS—is a card game called tarbish or tarabish. (Note that English spellings of Arabic words and names are phonetic, and vary from region to region and even family to family.) It is a game of tricks like euchre or 45s, and is a significant feature of undergraduate life at Cape Breton University.

Lebanese Atlantic Canadians are known for their hospitality, love of socializing with family and friends, music, dancing—and an occasional drink and a good smoke.

“Yes, the Lebanese smoke,” says Wadih Fares. “Here’s a little story: I remember I was going into a restaurant here about five years ago; the restaurant had no smoking inside but people could stand at the door and smoke. I was with a colleague of mine, and he said, ‘Do you have that in Lebanon?’” Fares laughs. “I said, ‘In Lebanon, you’d see the two guys not smoking outside and the rest smoking inside!”

Lebanese weddings are typically exuberant. Traditionally, the bride’s family and friends celebrate at her house, and the groom’s at his. Then the bride and her group come to the groom’s home. In a ritual called the zaffeh, the bride makes her entrance doing a sensuous dance. These days, since brides often wear conventional North American gowns, a belly dancer may perform in her place.

Not unlike other Atlantic Canadians, the Lebanese here enjoy a mahrajan, a large festival or gathering, and a hufflee (or hafli or huffli), a small party. Annual mahrajans now occur throughout the region. In Newfoundland, Sharon Dominic, granddaughter of merchant Saliba Dominic (who started out as a peddler and eventually opened S. Dominic & Sons Ltd. stores in Corner Brook and Botwood), now co-ordinates a growing annual gathering of Lebanese Canadians in St. John’s every July; Lorraine Michael, leader of Newfoundland and Labrador’s New Democratic Party, says she remembers big community parties among the Lebanese families clustered in the New Gower Street area (an area which has since been razed for redevelopment). She also recalls music and dancing—including the dabke, a type of line dance—and women taking turns belly dancing inside a circle.

In Charlottetown, the Canadian Lebanese Association of PEI holds an annual mahrajan roughly a week after New Year’s. Frank Zakem, a third-generation Lebanese Canadian, who was mayor of Charlottetown from 1975 to 1977, says that about half of the 600 people who attend have no Lebanese heritage—proof that, if there’s one thing that ties everyone together in Atlantic Canada, it’s the love of a good party.

“We know how to have a good time and we enjoy ourselves tremendously,” says Wadih Fares. “We are like Cape Bretoners that way. Kitchen parties are huge in our culture. You go to these huge homes and yet everybody is gathered in the kitchen. That’s where the fun is.”

Looking to the future

“I see a very bright future for Halifax and for Atlantic Canada,” says Fares. “I am very much engaged in immigration policy, and we need to accelerate our efforts to bring more people here, because we are going to need them.” Fares says it’s important that we not be handicapped by allowing only professionals and skilled labourers to immigrate.

“Our grandfathers came here with no education; their sons and daughters became the professionals and the skilled labourers—and the rest is history,” he says.

The Lebanese community has made important contributions to the economy of Atlantic Canada, and Fares sees himself as a key player in that community. He points out that during the recent economic crisis, he continued to take risks to help keep the region’s economy moving forward. “When times were really bad, I [still] had a $40 million project under construction,” he says. “That speaks volumes of our character as people and our entrepreneurship as people. It speaks volumes about our contribution to the economy. And at the end of the day, I say ‘ours,’ because it is our economy.

“This is where we live, and we are proud to be here.” 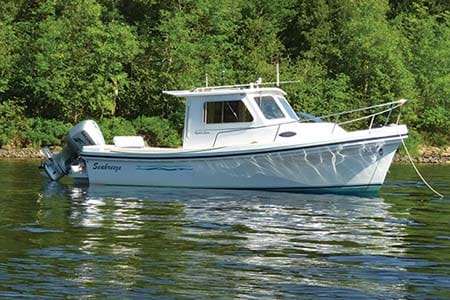 SAILING IS great, but returning on time can be a challenge. Eventually I cast off the bow line, selling the Jeanneau. Bitter end. A lifetime of messing around in boats stays in one’s blood though,... 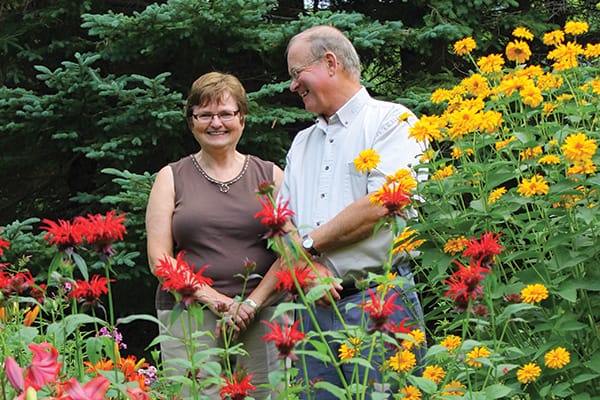 Driving through the Prince Edward Island countryside is delightfully confusing. You see a breathtaking scene in one area and decide it’s the most gorgeous you've ever seen. Then you drive on and...

From a Cape Breton home, Celtic magic is made with fabric