A suspension bridge and a tragedy more than 60 years ago help two communities keep connected.

There are 60 Prices listed in the current Boiestown, NB, phone book, a surname surpassed only by Munn and O'Donnell, many of whom are also said to be Prices by way of bloodline. If not for the temperament of the Miramichi River on May 10, 1939, there would likely be even more Prices listed.

That was the fateful day five local men-four of them Prices-attempted to cross the Priceville suspension footbridge as it hung precariously just a few inches above the flood level of the swift-moving Miramichi River. It's said that the weight of the five forced the decking of the bridge to dip into the current, causing one of the suspension cables to let go, recoiling and flinging the men asunder. Lost immediately to the chilling water were Tennyson and Willard Price. James Stewart, a man in his 70s, hung tough for a time but finally dropped into the river before the eyes of witnesses who could hardly bear to watch. Lawrence Price was cut free from the bridge's tangled wire and rescued by boat, while David Price managed to cling to the wire until he reached shore.

You'd think 67 years would leave even such a tragic event in the distant past, becoming another amongst the many stories that, strung together, form the legends and tales of the Miramichi. But the Priceville footbridge tragedy is as present in the hearts and minds of local residents today as it was in the weeks following the incident.

In the tightly interwoven community of McNamee and, across the river the more isolated Priceville-about 60 miles northeast of Fredericton-everyone has some form of connection to the men who died and the pair who survived that day.

There's irony in the explanation provided by the Woodsmen's Museum's executive director Bernice Price, who is the grand-niece of David. "It's because the bridge is sort of our lifeline," she says. "Our grandparents still talk about it as though it just happened yesterday."

The bridge remains both a lifeline and a practical transportation route. During this year's unseasonable January flooding, residents of Priceville were isolated except for access provided by the footbridge. It's how they got food and supplies and retained the comfort of feeling connected.

Semi-retired local outfitter and Woodsmen's Museum "professional volunteer" Vince Swazey says his wife, Hazel, had to use the bridge when she was stranded by the unforeseen mid-winter flooding. Forced to leave her car behind for the better part of a week, she was thankful for the safe passage out.

Today's Priceville bridge has two spans joined by a mid-point steel abutment, instead of the one long vulnerable strand of wire, wooden planks and cable that once earned it the nickname "the swinging bridge." The 210-yard link, the only footbridge left in Northumberland County, was entirely replaced in the late 1980s and is maintained by the provincial government's transportation bridge division based in Miramichi City. Bridge supervisor Sandy Donavan and his men tighten the suspension cables whenever needed and replace side fencing and treated planks as they weather or wear out. "It's pretty rugged these days," he says. 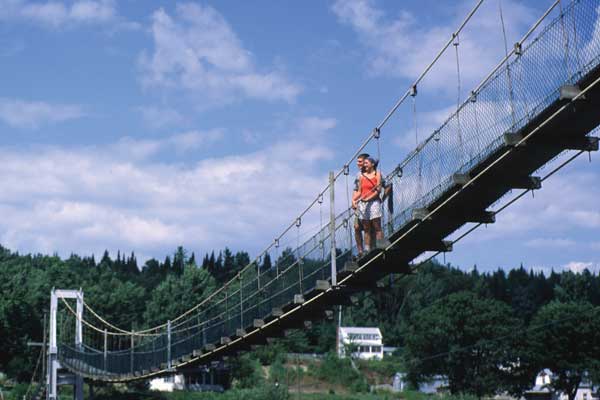 Bernice trusts the integrity of the bridge implicitly. She has been known to use it as a place to lay about and ponder the universe, sharing the outlook of prolific Miramichi author and humorist Wayne Curtis, who in his book Currents in the Stream wrote: "It's been said that the Miramichi is not so much a geographic location as a state of mind."

Her favourite Miramichi state of mind takes place late into clear nights when the stars are at their most brilliant. She is in the habit of joining her two teenaged sons and their friends as they lay end to end on the bridge's planks, staring at the stars until two or three in the morning. She says that in the uninterrupted darkness of rural New Brunswick, the clarity of the night sky is stunning. Bernice and her family stay attuned to announcements of astronomical occurrences and make their way to the bridge accordingly, just like they did for the Canada Day meteorite shower three years ago. It was just after the Doaktown fireworks had wrapped up. "With the reflection of the water beneath us, it looked like the meteorites were landing all around us," she says.

Beyond being a place for dreaming, the footbridge can cut down on driving time. Driving from Priceville it takes 20 minutes heading south to reach Route 8, which turns right toward Fredericton or left toward Doaktown. It's easier, says Bernice, just to walk across the bridge and have someone pick you up. That way the 40 minute trip to Doaktown is cut in half because there's no backtracking. People from the Priceville side are still commonly met by friends on the McNamee side for trips to the grocery store, to attend church or for community gatherings.

The Priceville suspension footbridge is not just a remnant of times and events past along the mighty, unpredictable Miramichi. It's also the thread that keeps the communities of Priceville and McNamee spiritually and emotionally entwined-perhaps even more so because of the tragedy almost 70 years ago.