Cheerful sunflowers welcome me as I approach the farmhouse. I spot Frank Cochrane next to a chalkboard sign that reads, “Welcome to Cochrane Family Farm.”

A boy staggers out of the house carrying, with pride, a huge striped zucchini. This is Brian, the youngest of the Cochrane family farmers.

“I want to show people how we save seeds,” Frank says, thanking Brian for the zucchini. He chops it in half and scoops out the innards.

It’s Open Farm Day: for one Sunday in September, farms across Atlantic Canada invite visitors into their barns and fields.

“We used to have more than 300 people on Open Farm Day,” says Frank. “Back when we had pigs. Now we just have poultry.”

“And lots of cats!” adds Brian.

I’m surprised at the exact number, but as I spend time with Frank and his wife Lisa, I realize the precision in this statement is indicative of their approach to farming. The operation seems to run like a well-oiled machine. Detailed recordkeeping and planning contribute to the success of the enterprise, which produces certified organic vegetables, seeds and herbal products.

On the 30-acre farm in Upper Stewiacke, NS, the Cochranes grow 148 varieties of certified organic vegetables, flowers and herbs. From May to October, they provide a weekly mix of vegetables to families around Truro. Year-round, daughter Julie sells vegetables to restaurants and at farmers’ markets in Truro and Musquodoboit Harbour. Seeds and herbal products are sold at organic farming events, consumer shows, and by mail order via the farm’s website.

Frank and Lisa have five children ranging in age from six to 24. Their farm has evolved as the family changes.

“The labour force has shrunk,” Frank jokes, as three kids have grown up and moved away. “As each kid left home, we cut back.” This is why they no longer have pigs, goats and sheep.

Their eldest son, Garth, is in the infantry. “After he completed basic training,” recounts Frank, “he said doing basic training was easier than working at the farm. But whenever he comes home for a visit, it’s like he never left. The same day he gets off the plane, he comes out and is helping us in the field.”

Julie, who is 22, lives at home and plans to run the farm after her parents retire. She enjoys the physical aspect of farming—the feeling of knowing she put in a good day’s work and will sleep well—as well as the great food. She and her parents are equal partners on the farm: Julie focuses on the vegetables, Lisa on herbs and Frank does seeds; but they all help each other.

On the farm tour, we approach an array of raised beds edged with hemlock boards. Once the beds are made, they are never tilled again. “This way, we’re not killing our little worm friends or the microbiology of the soil,” explains Frank.

Each of the 300 raised beds produces two to three crops per year. Radishes might be planted in early spring. After they’re harvested, beans are planted, followed by fall spinach.

“It’s a real joy and a lot of fun to grow so many types of plants,” adds Frank, pointing at yellow, red and striped tomatoes of various shapes and sizes. “That’s a work of art.”

“We like the unusual colours but we choose varieties based primarily on flavour,” Julie says. “We eat what we grow and we want great-tasting vegetables.”

Frank leads the tour past a greenhouse-like structure. Called a “high tunnel,” it’s covered with one layer of plastic and is used from March to December. Frank conducts workshops on how to make these at a cost of $750 each.

We enter a larger greenhouse where bushy plants are covered with brilliant red, ripe tomatoes.

“We don’t believe in the extra staking and pruning involved in most commercial greenhouses,” Frank says. “We challenge our vegetables to grow under normal conditions. I know that goes against industry, but I want to replicate Mother Nature so I can get the best seed and best-tasting tomatoes. I think the tomatoes are happy this way. We’ve already harvested 1000 pounds of tomatoes just for seed.

“It looks like a jungle now, but in two weeks, the tomatoes will be gone and the beds filled with new plants which we’ll transplant here.” He explains that they’ve already seeded winter crops, including kale, arugula, Asian greens, spinach and dark lettuce (light-coloured varieties don’t handle the cold well).

“This greenhouse,” which has a fan and two layers of plastic, “is going into its seventh year and has never been empty in that whole time. The longest a bed is left unplanted is a week.”

“In January, it can be 20 degrees in the afternoon, zero a few hours later and -12 degrees that night. Every night in the winter, we put row covers [light fabric] over the beds and put them to bed.”

“That’s lots of work,” says a man on the farm tour.

Cochrane Family Farm sells 200 varieties of seeds for vegetables, herbs and flowers. Most (65 per cent) of the seed they sell is grown on their farm.

“This is the second year of a carrot seed crop,” Frank shows us chest-high plants that look like dill (a relative) gone to seed. He planted carrots the previous spring and harvested them last fall. Two hundred of the ‘best’ carrots (in terms of shape, size, colour and flavour) were dug and stored over the winter. This spring, he planted these in the greenhouse; the seed will be ready October of Year 2.

“I started saving seeds in my early teens with my grandfather,” recalls Frank. “I remember how peaceful and satisfying it was, and how fascinating. I still feel that way today.”

There are no hybrid varieties on the property. Many seed companies sell hybrids (labelled F1 in seed catalogues) which ensures their customers buy seed each year because they can’t save seed from hybrids.

Instead, the Cochranes sells open-pollinated seeds. With a bit of skill, anyone can buy the seed one year, plant it and save seed for subsequent yers of planting. Frank loves the idea of his customers saving and even sharing the seeds they grow. By teaching people how to save seed, he explains, we can protect heirloom varieties from being lost.

“I’m fascinated with heirlooms,” says Frank. “We just harvested the Gilfeather turnip, a rare cross of turnip and rutabaga that was developed by John Gilfeather in New Brunswick in the 1800s. It’s white, delicious but ugly as sin.”

“Overall, we’re very careful about what we put in our bodies and on our skin,” says Lisa. “This part of the business seemed to be an opportunity to learn more and do more.”

The herbs fit well into the whole farm ecosystem. As we walk past a plant covered with blue flowers and surrounded by bees, Frank says, “Bees love borage; it’s frost-resistant and gives bees a good meal in late fall.” It’s also a medicinal herb.

A love of learning and teaching about crops up again and again in conversation. The kids were homeschooled (all but Brian have graduated). Frank speaks at conferences, garden club meetings and seed swaps around the Maritimes. On their “teaching farm,” the Cochranes offer farm tours and hands-on workshops on organic gardening, seed-saving and more.

“I’m one of those farmers who firmly believes in showing his mistakes,” Frank confides and gestures to brown leaves and rotting zucchini. “This happens when you don’t prepare properly for a frost.”

“We had to rip everything out and replant,” says Frank matter-of-factly. “We rebounded.” The short season is an obstacle but he says their number one challenge, as with many farmers around the region, finding reliable labour. “It’s hard to find people with the ability and willingness to work.”

Julie, Frank and Lisa work very hard, not only for the business but also to produce a year-round supply of delicious, healthy food. All winter long, they have fresh salads from the greenhouse, along with storage vegetables, such as squash and potatoes, and other vegetables they froze or dehydrated.

“If I never have to eat a store-bought vegetable again, I’ll be happy,” says Julie.

Whether you're lounging around the deck or hosting a family barbecue, you can make any occasion just a little more special by serving simple but refreshing cocktails. Summer drinks are often made... 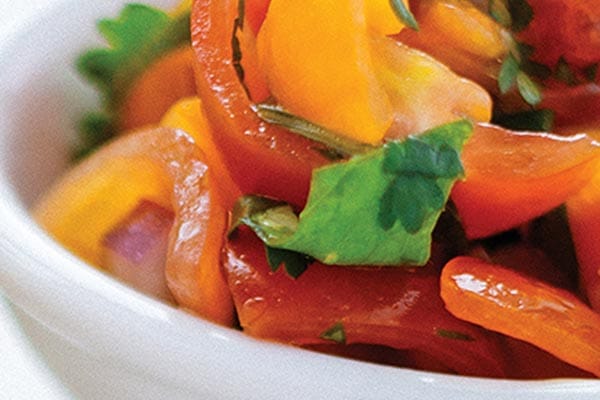 A summer salsa that is tasty year round.

With a pinch of flair and a penchant for local food, Alain Bossé brings soul to his soup pot.