William Butler Yeats would probably approve of our garden. Although we don't have "nine bean rows" or "a hive for the honeybee," which Yeats described in his poem The Lake Isle of Innisfree, we do live in a "bee-loud glade." Our garden is vibrant with birds, butterflies, bumblebees, and other beneficial creatures.

Help reverse the decline in pollinating species by creating a welcoming garden.

William Butler Yeats would probably approve of our garden. Although we don't have "nine bean rows" or "a hive for the honeybee," which Yeats described in his poem The Lake Isle of Innisfree, we do live in a "bee-loud glade." Our garden is vibrant with birds, butterflies, bumblebees, and other beneficial creatures. There are some nuisance creatures, such as slugs that dine on hostas, but the strongest remedies I use are diatomaceous earth around young hostas and water on the aphids. Ours is a pollinator-friendly garden.

By now, nearly everyone has likely heard of colony collapse disorder. Beekeepers are finding that their hives have been decimated, the majority of the working bees gone. Not dead. Simply vanished. This has caused a great deal of alarm in agricultural communities around North America, and with good reason. In the US, for example, honeybees pollinate more than 100 different types of crops-vegetables, fruits, seeds and nuts-and it's estimated that one out of every three bites of food eaten is directly the result of honeybee pollination. Yet 36 per cent of managed hives in the US didn't make it through the winter. In the UK, the figure was 21 per cent. The cause of this phenomenon is still unknown, although researchers are speculating that poor nutrition, pesticide exposure, habitat destruction, viruses and mites are all working together to plague honeybees.

Honeybees are not native to North America. Before they were brought to this continent in the 17th century by colonists from Europe, the work of pollinating plants was done by native creatures, including bees, butterflies and other insects, birds and bats, all of which still play an important role in pollinating today.

While I worry about honeybees, I also worry about the wild, native pollinators. Without them, we wouldn't have most of the crops we rely on for food. While some plants, such as soybeans, are self-pollinating (meaning the male pollen can reach the female ovaries and fertilize them, resulting in seed production), others need help. The Canadian Centre for Biodiversity estimates that 90 per cent of the more than 240,000 species of flowering plants rely on pollinators to aid them in reproduction. These aren't just food crops, either; they include plants used for fibre, fuel, and drugs, and forage crops for animals such as beef and dairy cattle. Environment Canada also recognizes that population trends for some bumblebees, butterflies, bats and hummingbirds have been declining in recent years. Because wild species of pollinators aren't monitored as closely as are honeybees, not much empirical data exists. But habitat damage and loss plays a significant role in population decline, says Sarina Jepsen, an endangered species co-ordinator with the Xerces Society for Invertebrate Protection, based in Portland, Ore. "Without habitat, it's difficult for these creatures to feed, breed and thrive."

That's where gardeners come in. By creating pollinator-friendly patches, or even entire gardens dedicated to encouraging pollinators, we can help reverse the decline before some species vanish forever, Jepsen says. "In many landscapes, flowers have been pushed to the margins. Providing patches of flowers is one thing we can do to improve the environment for pollinators."

The first step in creating a pollinator-friendly garden is to cease waging chemical warfare. Despite what lawn care companies and big-chemical organizations would have us believe, you can have a nice looking lawn and flourishing gardens of flowering plants, vegetables and fruit without dumping chemical fertilizers and pesticides onto everything. Pesticides are often broad-spectrum, killing beneficial insects along with the pests. Even those that are quite pest-specific can cause problems to beneficial creatures.

There are organic solutions that will help if you have a severe infestation of a specific pest, but do remember that organic does not mean harmless. Take, for example, rotenone, which is considered an allowable option for insect control in organic food production. However, rotenone is also toxic to aquatic wildlife and humans. Pyrethrin, another organic, plant-derived pesticide, is toxic to bees as well as targeted insects such as wasps. You can minimize killing beneficials as well as pests by following instructions for use to the letter, but first, please ask yourself why you need to use a pesticide at all. Unless you're a commercial farmer or horticulturist growing crops, be they vegetables or ornamentals, there is generally no reason to use pesticides in home gardening. Consider the fact that municipalities across Atlantic Canada are banning, or have already banned, the use of many pesticides for home yard and garden use.

Pollinators need sites where they can nest and lay eggs, locations for pupae to develop into adults, and sites for hibernating or overwintering. Windbreaks or hedgerows can contain a variety of plants with different bloom periods to attract many different insects. Dead trees or tree stumps are important nesting sites for many types of native bees, so if they are not a safety hazard, consider leaving them in place. For butterflies, you'll want to create a site that is sunny and sheltered from wind, but many other pollinators will come to sites that are partially shaded. 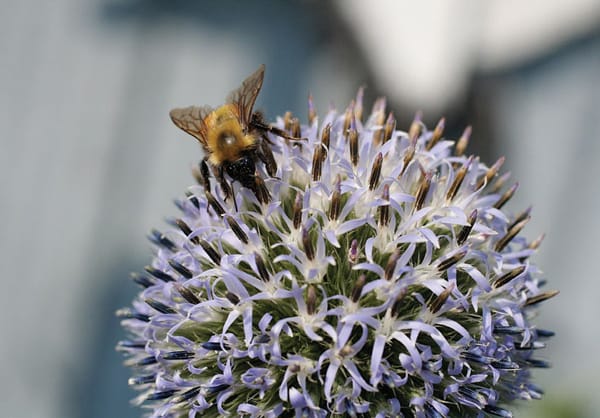 Gardeners in subdivisions, however, especially where there are zealots who break out chemicals at the sight of a dandelion or clover patch, may find it a challenge to encourage wild patches in their gardens because of grief from neighbours who don't understand pollinator habitat. Sarina Jepsen suggests that gardeners try creating a wild patch that is camouflaged from casual view by pollinator-friendly shrubs such as dogwoods, willows or other flowering shrubs. She adds, "Sometimes, talking to neighbours and explaining what you're doing and why helps to increase understanding." It might even get neighbours thinking about doing something similar.

There are hundreds, if not thousands, of plants that are pollinator-friendly and will help sustain populations. Old-fashioned or heirloom varieties of flowers, herbs and vegetables are usually better nectar-producers than newer hybrids, some of which are pollen-free so produce no nutrients for pollinators. Use colour in blocks or drifts, especially with annuals and perennials. Pollinators are attracted to large swatches of one colour or type of flower.

Select plants that will bloom at different times of the year. Spring flowering bulbs and perennials such as heaths flower early, and dandelions can be a real lifeline for pollinating insects as days warm up and they become active. 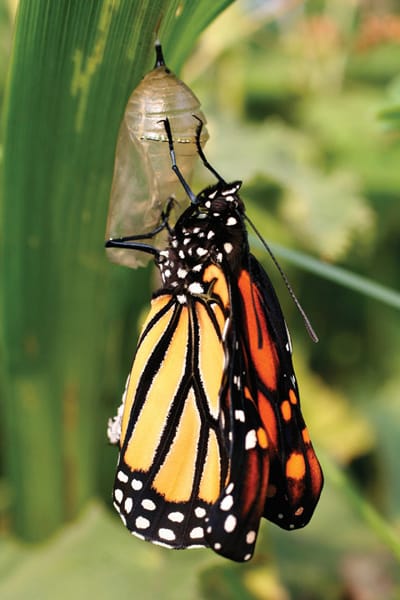 Providing water for birds can be as simple as keeping a birdbath filled with fresh, clean water. Butterflies also need moisture, some of which they get from nectar. Since they're not able to drink from a conventional birdbath, you can create a butterfly drinking site by either putting wet sand into a shallow dish or adding sand to a damp spot in your garden. You may see some types of butterflies gathered in large numbers around a puddle or wet sink in the yard. They're extracting minerals from the moist sand or mud.

Creating a pollinator-friendly garden or habitat doesn't need to be expensive or time-consuming. The main thing is to remember that we don't live in a vacuum, and by taking a few simple steps, we can help to ensure a "bee-loud glade"-and a world rich in pollinating diversity-in our own yards. And perhaps even beyond.