This part of the province’s coastline provides a unique view of the geological records of millions of years of earth history.

Along the Nova Scotia side of the Bay of Fundy and the Minas Basin, the tide rushes in every 12 hours, and can reach an incredible height of 16 metres (53 feet). Six hours later, the waters have receded, bearing the ocean floor, revealing a new crop of stones and unearthing new fossil remains with every low tide.

It’s against the law in Nova Scotia to dig or disturb fossils or artifacts without a permit. Protection for many of Nova Scotia’s natural and cultural heritage resources is provided by the Special Places Protection Act, which covers paleontological, archaeological, and historical sites and remains, including those under water.

Glimpse into the past

Nova Scotia’s fossils give us a glimpse into the distant past—when the climate was tropical and there were huge trees and ferns; dragonflies with a wingspan of half a metre, or two feet; and giant millipede-type creatures that could grow more than a metre long.

In locations separated by just an hour or so of driving time, it’s possible to visit numerous beaches where you can see fossils that date back to 300 to 350 million years ago. The interpretive centres and guided walking tours along many of these beaches will open your eyes to the wonders of the past.

Not far from the New Brunswick-Nova Scotia border is the community of Joggins, home to the Joggins Fossil Centre and the nearby Joggins Fossil Cliffs. At low tide, visitors can walk along the foot of the tilted layered cliffs that expose the geological history of 300 million years ago at this UNESCO World Heritage Site. The cliffs have long been referred to as “the grand exposure.”

“For each kilometre you walk along the cliffs, you are passing roughly a million years of geological time,” says Melissa Grey, curator of paleontology at the site.

Joggins has fossils from the Carboniferous, or Coal Age period. Experienced guides lead beach walks, identifying fossilized tree trunks and a variety of fossils that are embedded in these layers of time. Tides and erosion regularly expose more fossils.

Just a 45 minute drive from Joggins takes you to Parrsboro, NS, on the northwest side of the Minas Basin. Parrsboro has several fossil beaches within short drives of one another.

Ken Adams, director and curator of the Fundy Geological Museum in Parrsboro leads curatorial walks along various sections of the beach, during which he describes the geology and interprets “the stories the rocks are telling us.” You can also visit the museum’s geological and fossil displays—an excellent way to see how the different fossil sites connect through time, and a good place to admire gems and fossils found in the area. 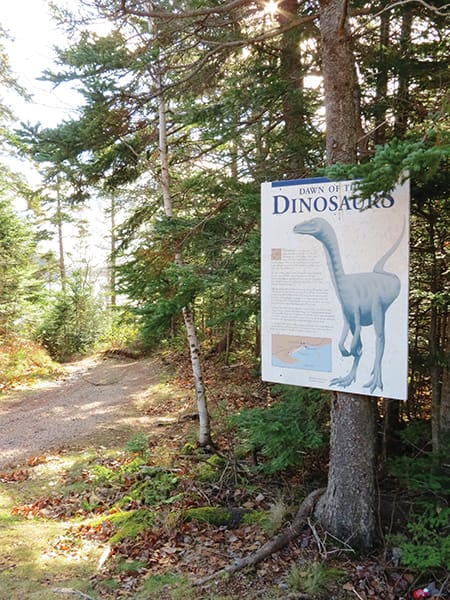 About six kilometres (3.7 miles) east of Parrsboro, follow the shoreline of the Minas Basin to wander on the beach at Wasson’s Bluff, where fossilized bone material from early fish to crocodiles to some large plant-eating dinosaurs has been found. (Note that Wasson’s Bluff is designated a Special Place under provincial law—see “Look but don’t take,” above—which means that it is illegal to dig from the cliffs without special permission, although collecting from the beach is permitted.) East of Wasson’s Bluff, near McKay Head, preserved dinosaur footprints have been discovered.

To the west of Parrsboro Harbour is Partridge Island, which is connected to the mainland by two sandbars; there, you may find agates and amethyst rocks on the beach. Farther along, at West Bay, you’ll find fossils of mollusks, plants and amphibian tracks.

Significant fossil finds from Blue Beach, on the western shore of the Minas Basin in Hantsport, are the oldest fossils from within the gap in the fossil record known as “Romer’s Gap”—a mysterious 30-million-year gap in the fossil record. The Blue Beach Fossil Museum offers explanations of the fossil tracks and describes how these footprints offer clues to the behaviours and habits of these early tetrapods, or four-legged vertebrates and their descendents.

Parrsboro is a good central location to stay for a night or two as you explore the many fossil and rock areas. Watch the changing tides at the Parrsboro government wharf, where the fishing boats race in on the high tide—and just a few hours later are sitting on the ocean floor.

Fundy fossil areas are a treasure trove for new or experienced fossil hunters and an adventure for the whole family. For the best experience, plan your trip around the low-tide times.