Springtime in wilderness is inspiring-forays into sun-dappled, fresh green forests alive with babbling streams can lift the most winter-weary spirits. But hark! As spring unfolds, a familiar, high-pitched whine develops. The expiry date for bug-free adventure arrives in a thin humming veil of black: mosquitoes and blackflies prospecting for blood. Only the most sterile, "urbane" environments escape the sound. Forsaking the wild, this crowd will sample the air through window screens and navigate open doors.

Later in the year, the motley cast includes no-see-ums, deer flies, horseflies and sand flies at the beach. Each species has its season, as spring matures into summer, and summer flashes into fall.

It should be noted that we are largely blessed with harmless wildlife. Our region lacks the poisonous snakes, scorpions, spiders and menacing gila monsters of southern climes. Mammals here-from moose, black bears and cougars to bobcats, coyotes, skunks and porcupines-prefer to avoid people. Our worst outdoor experience usually amounts to some pesky flies. However: natural help is at hand.

On a warm, steamy June morning several years ago, I was digging a trench along a forest path using my backhoe; a neighbour was helping me lay a new waterline. The biggest challenge was to ignore the enveloping cloud of mosquitoes. Around 10 a.m. a squadron of about 200 dragonflies suddenly appeared. Each dragonfly arranged its legs to form a basketball-style hoop net; they began swooping overhead, scooping the mosquitoes away. Fascinated, I turned the backhoe off to watch. After 10 minutes, this battalion of miniature helicopters moved off, leaving the sky mercifully clear for our work to resume.

When water-dwelling larvae transform en masse into air-breathing adult insects and struggle to clear the water, large speckled trout swirl and jump after the "hatch" in progress. Those fliers that escape the aquatic world face new predators on the land and in the air: dragonfly larvae and hunting spiders patrol the shorelines, nabbing larvae and newly transformed adults, while webbing spiders trap first-fliers in sticky nets.

Many seed-eating birds switch to insects for feeding their young when things get buggy. The increased protein in bugs, caterpillars and flies promotes healthier, faster growth for nestlings during spring and early summer-a time when seeds are scarce.

Warblers are small songbirds that migrate each spring from central and South America to breed here. They search out certain insects in specific levels or layers of the forest canopy. Another seasonal migrant, northern flickers perform a useful service in orchards by probing the ground for insects that are troublesome for apple and pear trees. Flickers also feed voraciously upon ants, their eggs and larvae, consuming as many as 5,000 in one meal.

Woodpeckers, chickadees, nuthatches, brown creepers and kinglets scour the forests for insects year-round. In one inventive flycatching technique, yellow-bellied sapsuckers drill a series of shallow holes in a tree trunk, then feast upon insects that are attracted to the sap that oozes out.

There are generalists and specialists: birds like sparrows, robins, jays and thrushes are generalists who include insects as part of a wider diet. Other classes of birds are specialized insect feeders. Kingbirds, flycatchers, wrens and even ruby-throated hummingbirds wait on a perch, searching the air, then fly out to intercept passing insects. This behaviour is often called "hawking" or "ambush hunting." Another group of birds employs a more energetic technique. Swallows, nighthawks and chimney swifts hunt on the wing, adeptly snatching insects out of the air. These insect-eaters have diminutive legs and more slender, delicate beaks than their seed-cracking, generalist counterparts.

As the sun sets, blackflies crawl off into crevices and vegetation to sleep until dawn returns, but mosquitoes continue to hunt-and be hunted-all night. Night-time predators include bats, small flying mammals that perform daredevil acrobatics in pursuit of insects: they can pinpoint the location of a fly or moth in the dark by emitting high-frequency sounds that bounce off the target and return, much like sonar. This echo location is a sophisticated tracking system that allows bats to detect and even possibly identify insects smaller than a mosquito. Their eyes are also well adapted for night vision. Bat populations play an important role in keeping insect numbers down, though cold, windy or wet nights mean fewer insects and poor hunting.

Insect-eating predators perform valuable ecological services for trees, crops and folks who would rather not be bitten. Translating that value into monetary terms offers an interesting perspective. Researchers in one study followed a flock of 266 evening grosbeaks for a 55 day period in one square kilometre of forest in north-central Washington. During that time the grosbeaks devoured nine million spruce budworms. The scientists calculated the cost of spraying insecticide for a similar result to be $1,810 US. The value of each bird for its insect control alone during that period was $6.80 US.

Encouraging wild animals that prey upon insects makes good sense, and can be done in a surprising number of ways. Nest boxes attract flickers, nuthatches, chickadees and swallows. On our land, rather than cutting down dying trees, we leave them standing-providing additional nesting opportunities for insect-eaters. Leaving wide hedgerows between fields and creating a tall forest with many tree species offers more vertical living space for small birds to find food and build nests. Brushpiles are also used for feeding and nesting by some sparrows and yellowthroat warblers.

New bat house designs are taller and larger, imitating large cavities in old trees, and help female bats to regulate inside air temperatures while raising their young in colonies.

After my experience with dragonflies, I investigated ways to encourage their populations. Across Canada approximately 200,000 square kilometres of land has been drained, mostly for agriculture. That's a land area larger than Prince Edward Island, Nova Scotia and New Brunswick combined. When folks were being advised to drain standing water off properties as a defence against the West Nile virus carried by some mosquitoes, we decided instead to excavate a series of ponds. Four years after initiating this project, the ponds' healthy, diverse ecosystems seem to have actually worked against mosquito populations-the noticeable decrease in biting insects is remarkable. And there's another advantage: water mitigates the effects of global warming. (See "H2O Rx," below.)

Summer days on the lawn and dock are now patrolled by dragonfly and damselfly species that did not exist here before the ponds were dug. This dovetails nicely with efforts to encourage bats, flickers and other birds, and their combined presence makes outdoor living around our home infinitely more easy-as well as enjoyable.

As small streams dry up during droughts-increasingly with global warming-young Atlantic salmon and speckled trout swim downstream seeking sanctuary in ponds. Wildlife from mice to deer emerge at dusk to drink and browse the lush surrounding vegetation.

Even if you live in an urban environment, lawns and gardens are more inclined to stay lush with an adjacent pond, which slows and pools water to moderate the effects of summer heat and dryness.

To create a pond, first dig a deep test hole (ours was eight feet) in a damp site that may contain clay soils. If water levels hold throughout dry spells, pond potential is good: your next step is to call in an excavator. Obtain permission from any appropriate agencies before altering existing waterways.

With seven ponds and counting, we moderate global warming with water-as well as moderating nature with nature.

THERE’S NO denying that gravel can be a little rough around the edges. Some might go so far as to say it’s a bit coarse. Lack of refinement aside, gravel deserves more respect—and not just because...

Painted rocks can be fun and whimsical - a fairy nestled in your strawberry bed to ward off bad spirits, for instance - or just really practical, as a street number marker for the end of the... 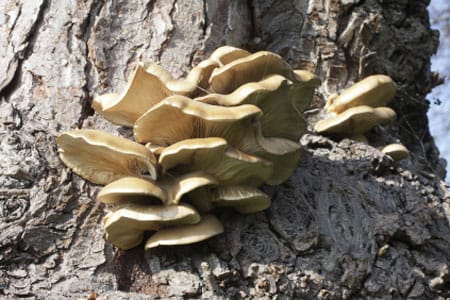 Call of the Wild Fungi

Whether entranced by the folklore, the gastronomic delight or the thrill of the hunt, Maritimers are drawn to woods and fields in search of wild mushrooms-assuming they're not felled by the fear...