It's hard to resist or miss these satchel mouthed songsters.

Of all the creatures that venture from woodlands to backyards, eastern chipmunks have to be one of the most entertaining and endearing small mammals. Masquerading as red squirrels in racing stripes and a short, more streamlined tail, most eastern Canadian chipmunks behave demurely, compared to their aggressive cousins.

While red squirrels camp in your backyard winter feeder, defending it against winged intruders, chipmunks slumber through the ruckus in an underground bunker as much as a metre deep. Not true hibernators, they awaken with a frequency that varies depending on the amount of food they have managed to amass over the previous summer and fall. Each chipmunk has its own den, and, when well-provisioned, wakes up to dine more frequently.

Arising from their sleeping chamber, which is part of an underground system of connected rooms and tunnels as many as nine metres (30 feet) long, an owner will stagger down the dark to use the chipmunk equivalent of a bathroom. They tend to drift along tunnels like sleepwalkers, finishing their toilet business and then proceeding onward to the stores room. After a fill-up, the fur-ball totters back down the tunnels, eyes closed, collapsing once again into the insulated, leafy softness of his/her sleeping chamber.

Native to all three Maritime provinces, 30 eastern chipmunks from the Tobeatic Game Sanctuary in Nova Scotia were introduced to the Barachois Pond Provincial Park of Newfoundland in 1962. Chippies have subsequently dispersed over more than 1000 kilometres of The Rock.

Adult chipmunks in Saltscapes country wake up early in the New Year. Leaving cosy burrows, they claw through the snow to emerge and find a mate. Breeding often takes place in late February or March; the precise timing varies with winter's severity. If ice has sealed the snow surface, preventing their emergence, they retreat back to their burrows for another week or two.

Eventually, a coming-out party that's somehow synchronized takes place. The woods are alive with chipmunk races and chases. In due time they scurry back to their sleeping chambers until winter's grip loosens with the arrival of spring. The gestation period for pregnant female eastern chipmunks is 31 days.

Fine spring days bring that old familiar sound. This arousing serenade frequently begins at sunrise. Our house is dug into the side of a hill, with a resident male chipmunk burrowed in beside the bedroom window. Scrappy, as we call him, is our version of a barnyard rooster, regularly performing the chipmunk equivalent of opera, using the window sill as a stage, at the crack of dawn-to our mild chagrin.

Meanwhile, back in her burrow, each female has been raising her young. Babies are born blind, naked, and weighing only about three grams in April or early May. The four to five pups of each litter emerge from their den five to six weeks later. By that time, except for a thinner tail, natty appearance with a perfect fur coat and slightly smaller stature, they look like adults. Youngsters are also distinguished by their adolescent behaviour, which includes exploring together, tumbling about, falling off the end of branches, hanging off the bird feeder, and other endearing entertainments. The family stays, plays, and learns together for about a month, before they set out on their own. During this time, one can discourage young Chippies who are looking for new homes from adopting garages, barns, or other outbuildings by keeping the doors closed.

Female chipmunks sometimes have a second litter in August. We have seen Scrappie and Crinky (male and female) lying together in the grass on hot summer days.

Summer supplies an abundance of seeds and fruit, so we don't put bird seed out until the fall. It's important that they learn to forage in the wild. Young chipmunks, oblivious to the winged and four-footed dangers of the world, scurry around the driveway gathering maple seeds as they twirl down en masse. Aerial skills come into play later when they harvest purple berries from the Indian pear trees. I have watched chipmunks search out and pluck fat, juicy caterpillars from parsley plants in the garden.

Voices and postures are used to communicate. Agitated individuals twitch their bodies and tails erratically while emitting a chippering sound. Danger means running and dodging with chittering squeaks and a tail standing straight-up like an antenna. They also make a low hollow clucking, for reasons that are less than clear. Stamping feet with an alternating rhythm relates to being upset or nervous. This frequently happens when several local chipmunks discover your spring bird feeder. Each one perceives it as their personal fast food outlet.

Take-out food makes sense for Chippies, because they are born with something red squirrels can only dream about-cheek pouches. As pint-sized vacuum cleaners, chipmunks are quite accomplished. Record stuffings include 70 sunflower seeds, six chestnuts (three per side), 13 prune pits, 32 beechnuts and 31 kernels of corn. Faces become distended, as Shirley Woods notes in his excellent book The Squirrels of Canada, as though they have a severe case of mumps.

After discharging their precious cargo in the storeroom of their burrow, individuals return repeatedly to consume load after load of bird seed. This gluttony is matched only by gullet-packing blue jays. Watching both species happily ransacking your feeder, it's worth remembering that they are responding to instincts that promise a better chance of survival through the next winter.

Eastern chipmunks are energetic, bright little characters who are active during daylight, so they are easy to watch. Rainy or hot weather often results in a retreat to dens. They live alone or in family groups until youngsters are evicted, which is usually by mid-summer. Ideal habitats can sustain as many as 25 adults per hectare (10 per acre). Burrows are located in dry ground with shrubs nearby that offer shelter and food. Woodland edges, hedgerows and old fieldstone fence lines are favourite haunts and homes. We construct brush piles and additional rock piles for both chipmunks and snakes, as they help to control garden pests. Noses are used as earth-movers, and a new burrow is easily spotted by the ring of excavated dirt around a temporary work hole.

Natural enemies include hawks, weasels, foxes and coyotes. Red squirrels chase them. Where they live close to humans, many chipmunks are killed by cats. One of my favourites, a female, avoided domestic cats on the prowl for five years. She was standing up one day, front paws crossed, looking at a car that stopped in the driveway. A cat pounced from that car directly onto her.

Her descendants often sit on my wife's lap on long summer days, packing away sunflower seeds that will hopefully get them through the cold siege to the gentleness of spring.

The Holly and the Ivy

Is there a plant that signifies Christmas to you? Do you wait eagerly for poinsettias, amaryllis and  Christmas cacti to go on sale in December? Do you plunder your holly shrubs for decoration... 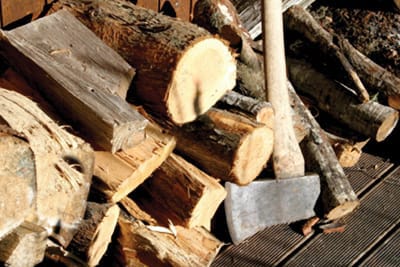 It all began with a headache on Jan. 1, 2000, when Y2K worries pushed this segment of the hearth industry into the spotlight. Suddenly, the allure of age-old wood heat-independent of wires and gas...

Nature, it seems at times, likes nothing better than to knock us humans down a notch or two, particularly when we purport to "improve" her handiwork by gardening or landscaping our properties.