Imagine a viable farm operating in a city.

Imagine having access to a community farm that operates on a pay-what-you-can model both for educational programming and food distribution.

These imaginings are actually in the process of happening—at the Hayes Farm in Fredericton, NB.

It all started as a loosely framed idea in the minds of members of NB Community Harvest Gardens Inc. (NBCHG). Co-chair Edee Klee explains that the mission of the organization is to “grow food, grow minds and grow community.” Since it formed in 2010, NBCHG has done this by creating two community gardens, countless public workshops and events, a seasonal U-pick by donation and a seed library program in partnership with the Fredericton Public Library.

Klee says, “About three years ago, spurred on by member gardeners, climate change, the lack of meaningful work, food security and sovereignty issues, and the Truth and Reconciliation Commission’s Call to Action, a courageous few of us decided to kick it up a notch.”

Could they create a small-scale, regenerative learn-to-farm program as a natural evolution to their small plot garden offerings in Fredericton? “Yes!” They simply needed to find some land in the city.

An idea is born

In the fall of 2015, a serendipitous introduction of Edee Klee to Ian Robertson (architect and executor of a 7.5 acre farm property in a north side Fredericton neighbourhood) led to turning this dream into a reality.

Robertson explains that in the late 1830s or early 1840s, his great-great-grandfather, Frances Hayes, purchased a 550-acre strip of land between the banks of the Saint John River and the Nashwaak River. In 1931, Leo Hayes (Robertson’s grandfather) was invited to move there to help run the farm.

Growing up close to the Hayes farm, Robertson has many fond memories of time spent there, including how the neighbourhood kids would gather in one of the pastures to play ball. “We used dry cow patties for bases although some weren’t completely dry. That got a little messy.”

The Hayes Farm ceased operating in the early 1960s although his grandmother and grandfather (Loretta and Leo) lived there until they died in 1974 and 1983 respectively. Robertson’s aunt Mary lived in the farmhouse until 2011; she died in 2015.

Having power of attorney, Robertson was present with his aunt Mary and her lawyer when she stated she wanted to see the farm property and the farmhouse itself remain “…as long as possible.”

“Although Mary was not aware of the urban teaching farm project, she would approve. My family’s role is to try and honour her wishes.” Robertson adds that the last living descendant of Loretta and Leo, Edith (Hayes) MacKay, lives in Quebec City. “She is 90 years of age, mentally sharp, and is aware of this project.” She, too, approves. So the property remains in the estate of Mary Hayes but is once again under production.

In his work as an architect, Robertson’s been involved in various developments. “Sometimes it seems out of control—too many people, too much development and not enough nature and green spaces left.” He believes that the chance meeting with Edee Klee back in 2015 was the perfect solution.

After two years of meetings, dreaming, and planning, the Hayes Urban Teaching Farm became a reality and conducted its first growing season in 2018. It is now simply referred to as Hayes Farm.

Claire May was hired as program outreach co-ordinator to get things going. “I had the immense pleasure of having seen the property before we stuck our first shovel in the ground,” May says, “To watch the property transform into a thriving market garden in the hands of our instructors, program participants and volunteers was nothing short of awe-inspiring.”

The current challenge is to evaluate what transpired last year, fine-tune the program and condense it into 18 weeks instead of 30. They also plan to grow more calorie-dense food, and make the food they grow more affordable and easier to access.

“As we develop our 2019 crop and program plans, as well as our new membership model,” May adds, “we hope to connect with more neighbours, learners, and eaters.”

From the start, personnel and volunteers have kept in mind findings from a survey conducted by the National New Farmer Coalition (NNFC) in 2015. Namely, today’s new farmer entrants are primarily urban, female, and choose to farm ecologically.

The NNFC is a collaborative, farmer-driven grassroots initiative which exists to encourage and support a new generation of farmers in Canada, and to advance food sovereignty. Food sovereignty is described by Food Secure Canada as: “The right of peoples to healthy and culturally-appropriate food produced through ecologically sound and sustainable methods, and their right to define their own food and agriculture systems.”

Corinne Hersey supports this concept and is an integral part of the team at Hayes Farm. She also teaches sociology at St. Thomas University and owns Natural Capital Gardens in Fredericton. Hersey says, “The biggest story here is that this remarkable farm has been revived in a city prone to rezoning everything they can from farmland to development.” Once farmland is sold outside the family, it is classified as residential; this is the by-law. “These few acres were only saved because Ian Robertson would not sell.”

The university professor leans heavily on Indigenous teaching and tradition, and works in concert with the farm’s manager (and co-instructor), Mark Trealout; together, they are responsible for curriculum development.

Back in 2016 Mark Trealout and his wife Laura Boyd were operating Grassroots Organic, a 10-acre market garden in Woodville, ON, in the Kawartha Lakes. He was also teaching in the Sustainable Agriculture Department at Frost Campus in Lindsay, ON, (part of Flemming College.) One of Trealout’s students brought the Hayes Farm project to his attention; Trealout started communicating with the planning team in Fredericton, pulled up stakes, and moved to New Brunswick.

Trealout was excited about this project and its potential from the first time he heard about it. He also appreciates that it’s organic and has a life of its own. Every day provides new learning opportunities.

As the growing season started last year, a plan evolved to take part in the newly-launched Thursday night Garrison Night Market in the city, as well as rounding up members who would buy CSA boxes (Community Supported Agriculture). They also hoped that chefs and restaurant owners would buy produce from the farm. Trealout says, “In terms of numbers, it went super well. We produced over 7,800 lbs of food, grossed just under $23,000, established some great restaurant relationships, grew our CSA to over 30 members by the end of the season—all on less than one acre of garden space. Not bad for a first year farm!”

A bigger challenge was the classroom setting, mainly because participants wanted to know about a wide variety of subjects—everything from small scale livestock and seed saving, to vermicomposting and ergonomic tool-use—to name a few. So it was tricky to get everyone focused on the bottom line, and to understand the slim financial margins in the realm of agriculture.

Another challenge was getting the ground ready to plant, and dealing with soggy, saturated soil conditions. Trealout is doing a lot of research and reading this winter about how to deal with clay soils, drainage options, and how to set up water filtration systems.

In spite of the challenges, it’s been hugely rewarding, and the farm manager is grateful for the wide-spread community support. For example, knowing that they would need a boost to quick-start some seedlings, Scott’s Nursery Ltd. stepped up to the plate and started plants for them in their greenhouses.

At one point, when the Hayes Farm team needed extra plots tilled but were trying to do so without use of heavy fossil-fueled equipment, they rigged up a human-powered cultivator; the results were not stellar. Enter local, Craig Sabean—owner of Napadogan Horse Logging—with his horse Idaho. Everyone grew to appreciate the meaning of “horse-power.” Then there was the day when a slew of students from Corinne Hersey’s class at STU had the day off and descended on the farm—en masse, and unannounced. The first carload arrived and was dispatched to dig carrots. When a second carload arrived, Trealout put them to work pulling lamb’s quarters. More and more cars arrived, full of students.

“Our goal is to become an ‘essential service’ to our immediate community. Instead of teaching from the point of view of making the most profit on a farm, we are aiming to teach from the point of view that the best thing a farm can grow is a community,” Trealout says, adding: “And the best way to do that is to feed our local community in a meaningful way. Profit be damned!” 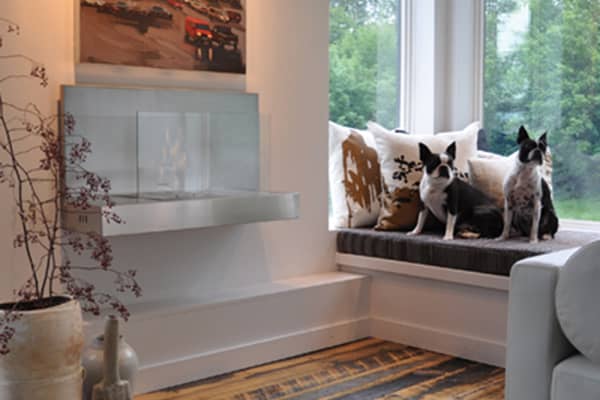 Whether gathered around a campfire or patio fire-pit, a hearth or kitchen cook-stove, Atlantic Canadians love their flames. Over time, stoves and fireplaces have become, like other design elements in... 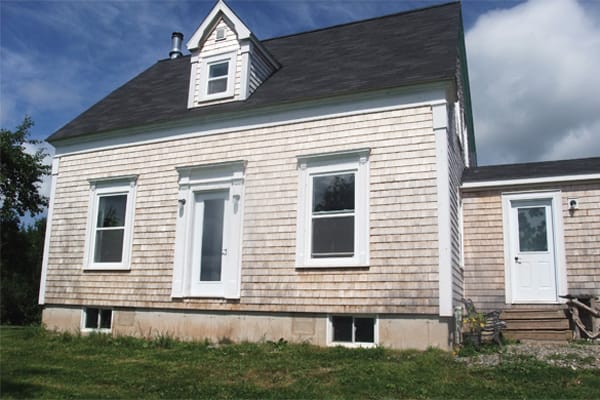 Family Makes the Difference Between a House and a Home

Lift open the latch on the small, weathered door leading into a spare bedroom upstairs in Ryan MacInnis's century home in the rolling hills of northeast Mabou on western Cape Breton Island, and you... 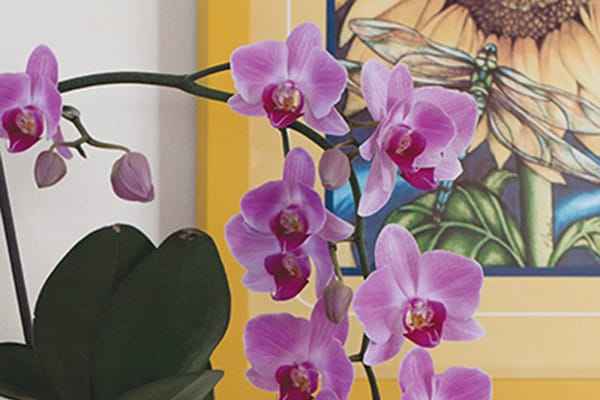 Live-In Companions (Plants, That Is)

THE LAST TOMATO has been harvested, and the basil long since made into pesto. The perennials have given over their blooms to seedheads, and the last of the leaves have dropped from trees and are...